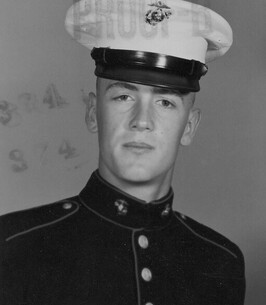 John Timins, 77, of Beckley, WV passed away after a long battle with illness on May 26, 2022. John was born Alfred Timinski in Orange, NJ. He served overseas in the United States Marine Corps from 1962-1966. After his service he attended Uppsala College and New Jersey Institute of Technology and became a civil engineer. He worked for Edwards and Kelsey Engineering, Turner Construction in Bethesda, MD, and Adolph Coors Company. He worked on projects such as the National Institutes of Health as well as some major dam and transportation engineering projects in VA and NJ.

John enjoyed bartending at his father's bar, Adam's Tavern, in the Valley in Orange, NJ. He also enjoyed boxing, racing his '64 Corvette in Englishtown NJ, going "down the shore", playing golf in Myrtle Beach, and running for public office.

A Mass of Christian Burial was held on Tuesday, May 31, 2022 at 9:00 a.m. from St Patrick Catholic Church of Weston with Father Douglas Ondeck as celebrant. Entombment will follow Mass at Holy Cross Cemetery Mausoleum of Clarksburg, WV. Full military honors will conducted by the Harrison County Honor Guard. On-line condolences and life stories in memory of John may be expressed at hardmanfamilyfuneralhome.com. In lieu of flowers donations may be in John’s memory to National Center for PTSD at ptsd.va.gov or Wounded Warriors Project at https://www.woundedwarriorproject.org/.

Hardman Family Funeral Home of Weston considers it an honor and a privilege to serve the family of John Timins.