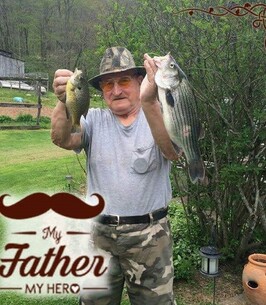 John worked at the Louie Glass Factory in Weston as a glass worker and gatherer. He was a hard worker and was always working on some project of his own. He enjoyed hunting turkey and deer and fishing. John was known for making fishing poles from bamboo cane and giving them away as gifts, especially to children. John enjoyed being with his family and will be missed by his family and friends.

Family and friends will gather at Hardman Family Funeral Home 730 N. Main Avenue of Weston on Friday, October 21, 2022 from 11AM-1PM. The funeral service will begin at 1PM from the funeral home chapel with Reverend Russell Furr officiating. Interment will follow services at the Snyder Cemetery in Churchville, WV. Online condolences and life stories in memory of John may be expressed at hardmanfamilyfuneralhome.com.

Hardman Family Funeral Home of Weston considers it an honor and a privilege to serve the family of John Patrick Rowan.