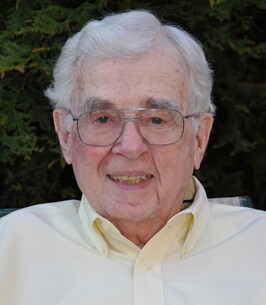 Donald Paul Fury, 95, of Fort Thomas, KY, formerly of Hamilton, OH, passed away peacefully on Thursday, October 21, 2021, with his children by his side. Don (lifelong nickname: “Blaze”) was born April 18, 1926 in Weston, WV, to the late Grant Fury and Opal Arlett (nee: Gay) Fury, and was preceded in death by his three brothers, Lesley (“Les”), Verland (“Bud”), and Forrest (“Fats”). Don graduated from Weston High School and the University of West Virginia, where he was a member of the Phi Kappa Psi fraternity. After graduation, in 1951 he married Norma Jean Dean (who predeceased him) before serving in the US Army during the Korean War, stationed in Austria. Upon his honorable discharged from the service, Don began his career in retail management with the J.C. Penney Company, rising to store Manager in Georgetown, KY, and in Hamilton, OH. In both cities he was a well-known presence in the business community and a member of the Rotary, Kiwanis, and Chamber of Commerce, as well as an active member of his church. In 1982, Don met his long-time companion, Keta Faye Gillenwater, also a well-loved presence in retail in Hamilton, and they spent almost 30 happy years together until her untimely passing in 2010. Both had a wonderful sense of humor and loved joking with family and friends, but mostly they loved spending time with their grandchildren, who survive them. After moving to Ft. Thomas in 2010, Don joined a group of gentlemen once a week for “Breakfast with the Boys” at the Frisch’s in Bellevue, always at the same table by the front windows. One of his friends there said he was the “most considerate, kind person (he) had ever met”, an opinion shared by many. Don is survived by his daughter Dr. Debra Fury Schulte, son-in-law Dr. Michael Schulte of Ft. Thomas, KY; grandchildren Scott Schulte, Brad Schulte (Stephanie), and Sara Schulte Claxon (Kevin); great-grandchildren Conner and Sophie Schulte and Camille Claxon; and his son Dennis Fury of Highland Heights, KY, and grandson Jose Giraldo (Fury). Don is also survived by his best friend of 40 years, Jesse Rogers of Hamilton, OH. Visitation 10:00 am to 11:00 am, Tuesday, October 26, 2021 at St. Andrew's Episcopal Church, Fort Thomas, KY. Funeral Service will follow at 11:00 am at the church, with Fr. Jeff Queen, officiating. Burial will take place in the Lewis County Memorial Gardens, Weston, WV, at 12:00pm on Saturday, October 30, 2021 with Father John Valentine officiating. In lieu of flowers, memorial contributions may be made to St. Andrew’s Episcopal Church. Ft. Thomas, KY. Dobbling, Muehlenkamp & Erschell Funeral Home is assisting the family with arrangements. Online condolences can be given at www.dmefuneral.com. Hardman Family Funeral Home of Weston, WV is assisting with local arrangements and condolences and life stories in memory of Donald may be expressed at hardmanfamilyfuneralhome.com.